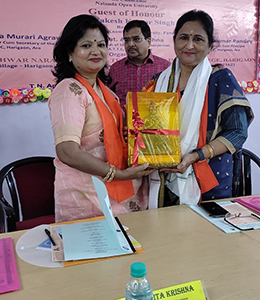 The Institute, Tarkeswar Narain Agrawal Teachers Training College (T.N.A.T.T.C.) has been established in Harigaon Village in the District of Bhojpur (Bihar) just about 11 kms from Ara, the headquarters of Bhojpur District, Harigaon is now a historical village because the ancestors of the former Prime Minister of Mauritius and of the present Prime Minister Hon'ble Naveen Chandra Ramgulam, went to Mauritius more than 100 years ago. This Institue is situated on the Ara-Mohania National Highway. The objective of the Institute is to produce competent trained teachers for secondary schools to meet the urgent need of suffcient trained teachers, particularly in Bihar that is facing acute shortage of trained teachers, by imparting quality teachers training in accordance with the guidelines of National Council for Teacher Education. To achieve this end the Institute has taken pains to appoint teachers who are well-versed in the field. For proper training, adequate infrastructure and proper environment are pre-requisites which the Institute has tried, and will try, its best to provide.

The Institute aims not just at providing training to teachers in the art of teaching but also inculcating all those moral values that will go to the making of ideal citizens of our Republic.

With all my best wishes for its developments.

Dr. Sarvepalli Radhakrishnan was one of the most distinguished diplomats, scholars and teachers of India, apart from being the first Vice President and the second President of the country.

As a tribute to this great teacher, his birthday is observes Teachers Day across India. As a matter of fact, when his students and friends asked him for the permission to celebrate his birthday, it was he who asked them to celebrate the day as Teachers day honoring the efforts of teachers across the country.Dr. S Radhakrishnan was born on September 5, 1888, at Tiruttani, forty miles to the northeast of Chennai (then Madras), in South India. His early years were spent in Tiruttani and Tirupati, both famous as pilgrim centers. He graduated with master’s Degree in Arts from Madras University. In April 1909, he was appointed to the Department philosophy, at the Madras Presidency College.

From then onwards, he was engaged in serious study of Indian philosophy and religion, and went on to become a teacher of philosophy.

In Oxford, Dr. Radhakrishnan lecturer the students on Comparative Religion, From 1936-39, he served as the Spalding Professor of Eastern Religions and Ethic,s at Oxford University. In 1939, he was elected Fellow of the British Academy. From 1939-48, he was the Vice-Chancellor of the Banaras Hindu University. He later held offices that with India’s national and international affairs. He was the leader of the Indian delegation to UNESCO during 1946 Dr. Radhakrishnan served as the Ambassador of India to U.S.S.R. during 1949-52. He was also a member of the Constituent Assembly of India.

Dr. Radhakrishnan penned down a number of books during his lifetime. Some of which are like The Hindu View Life, The Idealist View of Life, Religion and Society, Eastern Religions and Western Thought and A Source Book Indian Philosophy. He had also written for some of the most reputed international journals.

Dr. Radhakrishnan was the Vice-President of India form 1952 to 1962 and the President, General Conference of UNESCO, from 1952 to 1954. He held the office of the Chancellor, University of Delhi, from 1953-62. In May 1967, Dr. Radhakrishnan became the President of India, a post he served till May 1967. He was honored with Bharat Ratna in 1954. He was also knighted by the British government in the year 1931, but, he used only his academic title ‘Doctor’ throughout his life.

The main purpose behind Teachers' Day celebration is to make the teachers feel special about themselves. It is the time to show that you appreciate the efforts taken by them, to shape your career and channelize your knowledge to be utilized in the right way.